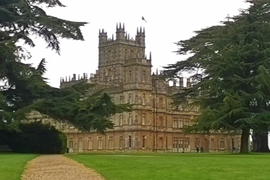 Were you one of the millions who tuned in this week for the first episode of Downton Abbey’s fifth season? With the excitement that has built around this hit drama, Crystal Cruises is offering its travelers the rare opportunity to live the luxurious life depicted in the show, replete with early 20th-century period costumes and cars, and exclusive access to filming locations, including Downton itself—the real-life Highclere Castle.

Guests will visit Highclere Castle in Hampshire, arriving just like visitors on the show — in vintage 1920’s automobiles, driven by chauffeurs. There, Crystal travelers will be the guests of honor at a private champagne reception and tour of the estate, including numerous rooms made famous on the series, such as the library and drawing room.

Leading up to the Castle, guests will also visit Berkshire’s Basildon Park, which is used as the Grantham family’s London house; Swan Inn, where Lady Sybil and Branson elope; Byfleet Manor, known as the Dowager Countess’ home, for lunch Downton-style, with period-costumed hosts; and Bampton, a village filled with locations that double as the Crawleys’ home, the hospital, and the church where Lady Edith was jilted at the altar.

Guests will spend the night at an authentic English manor house – that has been transformed into the elegant Four Seasons Hotel Hampshire, boasting the most luxurious of amenities.

“Through our exclusive connections, only Crystal travelers will be able to participate in this royal treatment, and have this unique opportunity to step back in time to the sumptuous world of gowns, gloves, and grand gentility,” according to Crystal President Edie Rodriguez.

Crystal Cruises is the world’s leading luxury cruise provider, having earned more “World’s Best” awards than any other cruise line, hotel, or resort in history. Please contact us if you are interested in making a reservation on this exclusive cruise.