Tauck has announced a new expanded and more intensive People-to-People cultural program to Cuba that explores more of the country beyond Havana. The expanded 13 day itinerary, “Cuba: Connecting with People and Culture”, includes three nights in Havana, two nights in Cayo Santa Maria, three nights in Camaguey, one night in Holguín and two nights in Santiago de Cuba.

Tour highlights include visits to the:

The Tauck People-to-People program also includes guided walks of Habana Vieja, the heart of Havana and a UNESCO World Heritage Site and the Colon Cemetery, one of the largest in the world.

Tour participants will delve into Cuban education, history, music, architecture and enjoy encounters with contemporary artists and musicians, a visit to an organic orchard, a Catamaran ride to Cayo Granma to meet local fishermen, dining at privately run paladares, and interactions with local Cubans and their culture.

“Cuba has been incredibly popular with our guests since our very first departures in 2012,” said Tauck CEO Dan Mahar, “and we’re thrilled to be offering an enhanced and expanded itinerary there.” 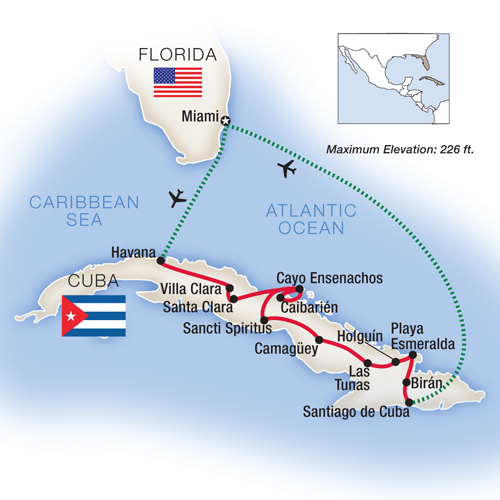 Prices for Tauck’s 13 Day People-to-People Cuba itinerary start at $7,465 and include all accommodations, gratuities, meals, ground transportation, sightseeing, luggage handling, and airport transfers. The tour begins with an overnight stay at Sofitel Miami (transfer from Miami International Airport included), followed by a charter flight to Havana.

Departures are scheduled from January through early June, 2015. For more information or to make a reservation, contact Global Travel Destinations.