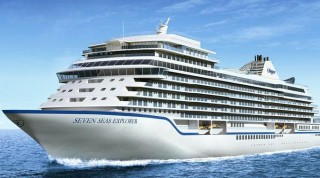 When the Seven Seas Explorer debuts, it will feature four new shows in its the Constellation Theater. A cast of 12 singers and dancers will perform the shows along with a live seven-piece orchestra.

“From the opulent suites and world-class spa, to the gourmet restaurants and elegant lounges, we are fully committed to making Seven Seas Explorer the most luxurious ship ever built. It is important that we provide our guests sailing on Seven Seas Explorer with the highest quality entertainment available, so that feeling of excellence transcends the entire shipboard experience,” said Regent Seven Seas Cruises president and COO Jason Montague.

Seven Seas Explorer’s maiden voyage is July 20, 2016 when it sails from Monte Carlo to Venice. It will spend its inaugural season in Europe before heading to Miami for a series of Caribbean voyages.

Contact us if you’d like more information or to make a reservation on any Regent Seven Seas voyage. Or visit our web site for a complete list of itineraries.