Skip to content
Home Other Cruise Lines Aboard the NCL Dawn in Portland, Maine

Aboard the NCL Dawn in Portland, Maine 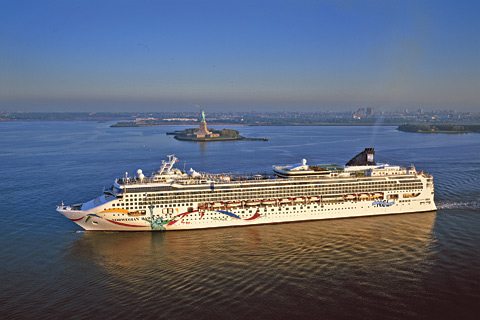 We’re onboard the NCL Dawn that sailed from Boston last night for a 7 night northbound New England/Canada cruise to Quebec City.  It’s been a number of years since we’ve sailed NCL.  This has always been an interesting itinerary, especially if you can time it right for the beautiful New England foliage. So far we haven’t seen much color – it’s still too early this far south in both Boston and Portland.

The NCL Dawn is a more ‘mature’ lady in the NCL fleet, built in 2002 and refurbished in 2011.   Our overall impressions are that the crew is doing a great job of keeping the ship in  shape. While a bit small, and overly crowded with furnishing, our balcony stateroom is in good repair with fresh carpet, and linens.  The amazing amount of wood paneling and cabinetry is very well kept.

With beautiful weather in Boston, we’ve enjoyed the outdoor venues onboard the Dawn until sunset.  Our favorite so far is the Bimini Bar and Grill.  This cozy Cape Cod inspired alcove at the top of the forward elevator on deck 13 has nearly unlimited views across the main pool and toward the rear of the ship.  Today’s sailaway celebration was loud and entertaining, punctuated by the nearly constant landings of large and small aircraft into Boston’s Logan Airport.  The 747 that screamed overhead just as we were making our turn into Boston Bay was particularly exciting as it seemed just feet from our top decks.

After a short day here in Portland we’ll visit a favorite port of Halifax, Nova Scotia, then on to PEI, into the St. Lawrence with two stops at Gaspe and Ville de la Baie HaHa and finally to Quebec City.  More from Halifax tomorrow… 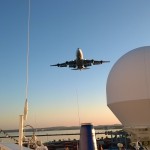 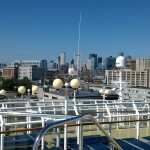 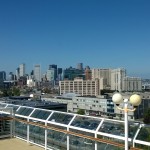 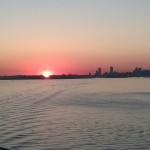