The Forbidden City and Terracotta Warriors 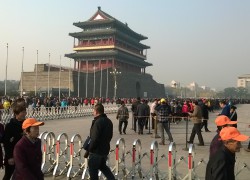 Our last day in Beijing begins with a walk around Tiananmen Square with seemingly endless lines of Chinese visitors waiting to see the National Museum of China and Memorial Hall, the final resting spot of former Chairman Mao Zedong.  Outside China, this location undoubtedly brings to mind the 1989 pro-democracy protests that ended with a declaration of martial law and the brutal shooting of hundreds or possibly thousands of civilians.  North of the square is the Forbidden City, ancient palace of Chinese emperors and political center for over 500 years.  With nearly 1000 buildings, the Forbidden City is a massive World Heritage Site still protected by a tall wall and water filled moat.  After viewing the largest halls along the central axis, our group is permitted access to a hall normally closed to the public. We are privileged to see some of the original antiques from the emperors courts.  After completing our tour, we’re on the way to the airport and a late afternoon flight to Xi’an.  In Xi’an we check in at the Sofitel People’s Grand Hotel for a rather quick noodle making lesson and a late dinner. In what has turned into a long day, we’re anxious for our visit to the famous Terracotta Warriors tomorrow. 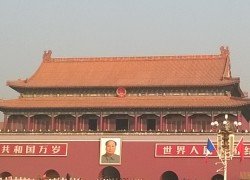 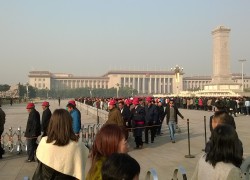 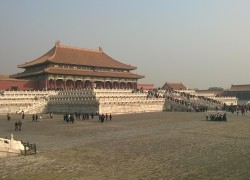 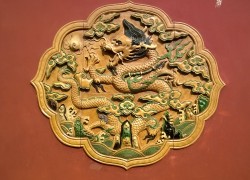 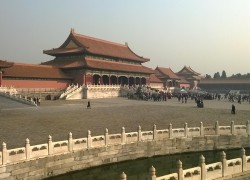 The Terracotta Warriors are located outside of Xi’an in a large complex of building and gardens, somewhat reminiscent of an American amusement park.  The largest of these buildings covers Pit #1, the excavated area where the warriors were accidentally found in 1974.  Estimates conclude that approximately 6000 warriors and horse were arranged here.  Two smaller pits have also been partially excavated, #2 containing infantry units including war chariots.  Pit #3 is thought to be a commander area, with high ranking officers and war chariots.  An empty pit, #4 is thought to have been abandoned once the Emperor died.  The terracotta army and underground pits were constructed by an estimated workforce of over 700,000 laborers and craftsmen.  All of these people were killed and buried nearby when the Emperor died to preserve the secret of his tomb and the huge army that protected it.

Entering Pit #1, the huge vastness of this place is immediately obvious.  The majority of the excavation work has been done at the front of this pit where the warriors stand shoulder to shoulder 4 across and in 11 columns.  Interspersed with the soldiers are 4 abreast horses. The wooden chariots originally pulled by the horses have long since disappeared leaving only the wagon wheel impressions in the compressed dirt. Departing from the original viewing gallery, we continue around the outside edge to see the progression of excavation work.    At the rear of the pit, we’re nearly face to face with the warriors that the teams of excavation and reconstruction staff are still at work to rebuild.   They are also working to preserve original colors which are currently lost very quickly when the terracotta is exposed to air.    The other two pits, while smaller, contain different figures and are at different levels of reconstruction. 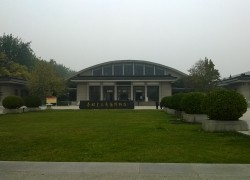 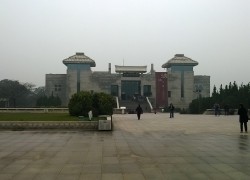 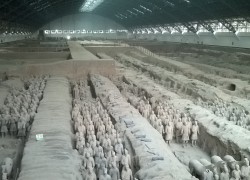 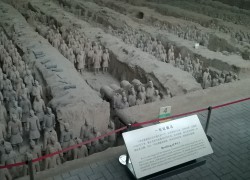 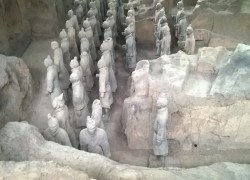 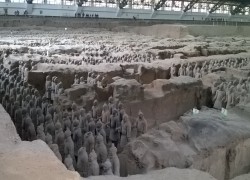 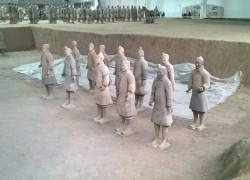 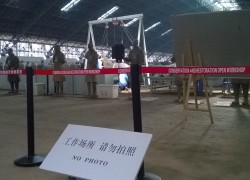 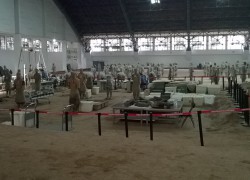 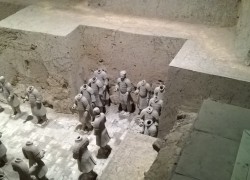 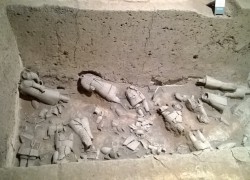 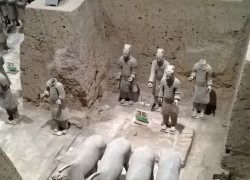 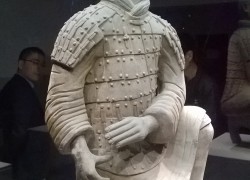 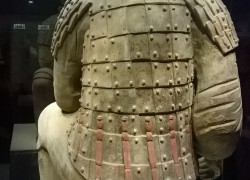 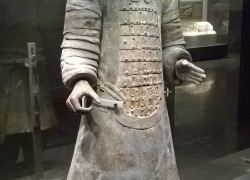 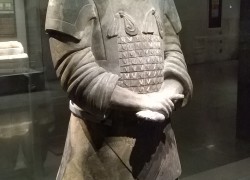 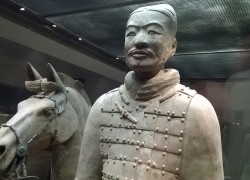 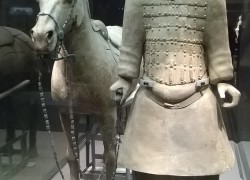