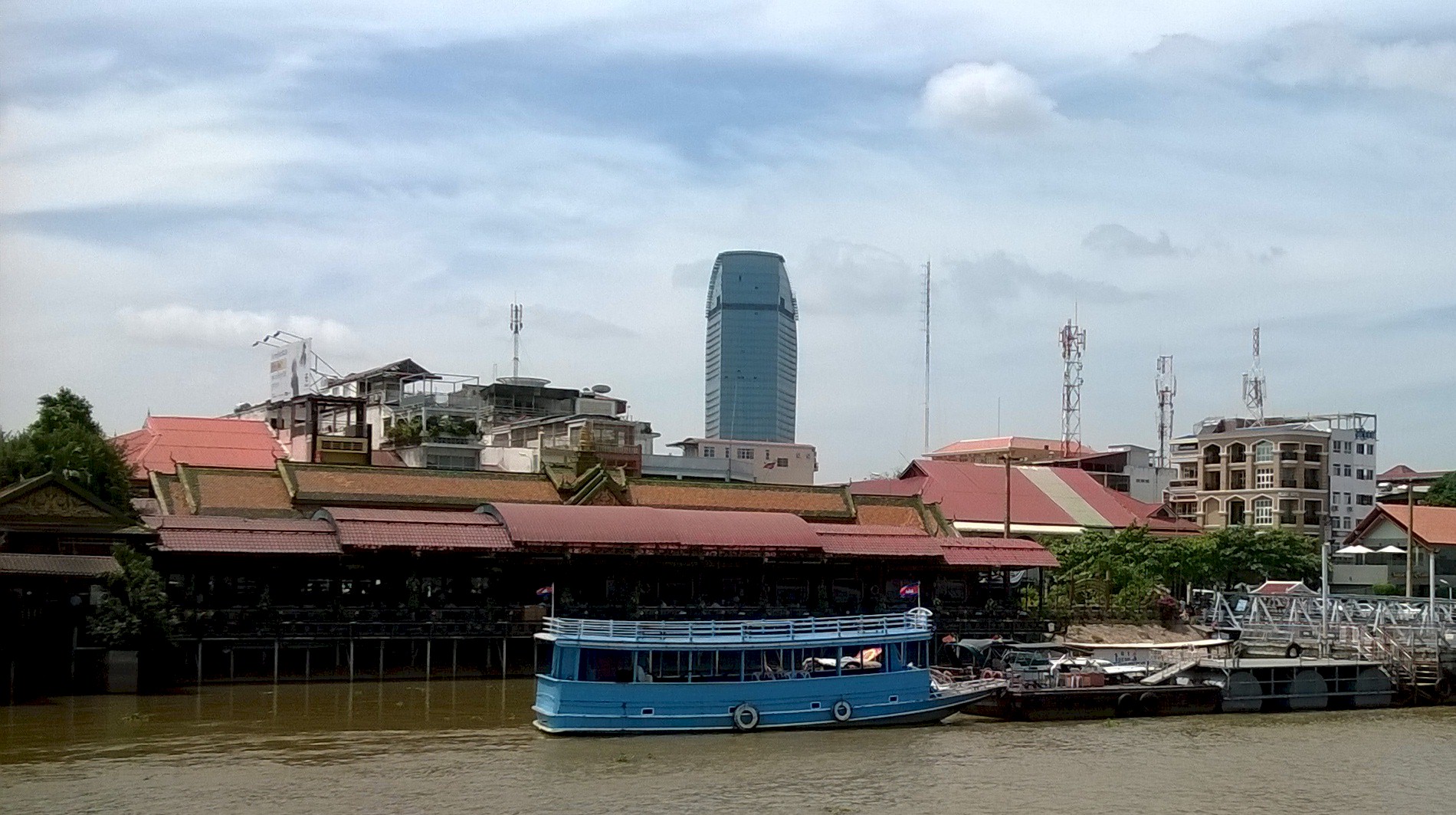 Phnom Penh is the capital and largest city in Cambodia.  Founded in 1434, the city was known as the “Pearl of Asia” for it’s beautiful French-built buildings and grand boulevards.   Unfortunately it is also known for the dark, terrible past beginning with  the evacuation of the city in 1975 by the Khmer Rouge.

Our tours today were graphic examples of this opposing past, with our first morning tour beginning at the beautiful grounds of the Royal Palace.  Somewhat like Buckingham Palace in London, the Royal Palace is a complex of buildings set among lush, beautifully landscaped gardens and serves at the royal residence of the King of Cambodia. The flag as seen here indicates that the King is in residence.  In fact, on the day of our visit, the royal red carpet was out, indicating some type of official visit by a dignitary from another country.  Just as in the UK, the King of Cambodia is a symbolic figurehead, he represents peace, stability and prosperity to the Khmer people.  Unlike in the UK, the King of Cambodia is an elected monarch, one of the few in the world.  However, this isn’t a public election, instead a Royal Council of the Throne “elect” the next king from among the members of the royal family.  This is especially important with the current King, a bachelor with no full brothers – only 14 half-brothers.  It’s expected that his nephew may be first in line to the throne.  Following the visit to the Royal Palace we saw the spectacular Silver Pagoda, toured the National Museum and spend about 30 minutes in the interesting chaos of the central market. Stupa of Skulls at Choeung Ek

The afternoon tour is much more somber when we visit one of the “Killing Fields”, an execution and mass grave location outside of Phnom Penh.  We’ll also visit the notorious S-21 prison and interrogation center in the city.  The history and actions behind the gruesome reign of the Khmer Rouge are little know by Americans. However the decisions and events that surrounded their rise to power are well known as part of the Vietnam War (known as the American War in Cambodia and Vietnam) which ended following the fall of Saigon in 1975.  During the height of the war, it became more and more difficult for Cambodia to maintain their neutrality and, in 1965,  they severed diplomatic ties with the US  As US aid dried up, the country fell into political instability and civil war.  The final blow to the stability of Cambodia may have come in 1970 with President Nixon’s secret order of airstrikes against North Vietnamese camps and supply lines in eastern Cambodia which included huge swaths through Phnom Penh.  The influence of these airstrikes on the rise of the Khmer Rouge are unknown, but at least believed to have boosted recruitment within their ranks and certainly plunged Cambodia into a state of chaos.  Completing the take-over of the country in 1975 by seizing Phnom Penh, the Khmer Rouge begin enforcing orders to evacuate the city by either forcing residents into the country side, imprisoning them in torture centers or killing them.  In all nearly 2 million people, a quarter of the country’s population, died as a result of execution, disease, starvation and overwork during the 4 year rule.  Specifically targeted were intellectuals such as authors and doctors, along with religious figures.  Family relationships were banned, with children brainwashed to spy on their parent and adult relatives. Today the “missing generation” is evident in nearly every aspect of life in Cambodia, from our young tour guides, to the ship’s crew, hotel staff, and even the tuk-tuk drivers waiting for us on the pier. 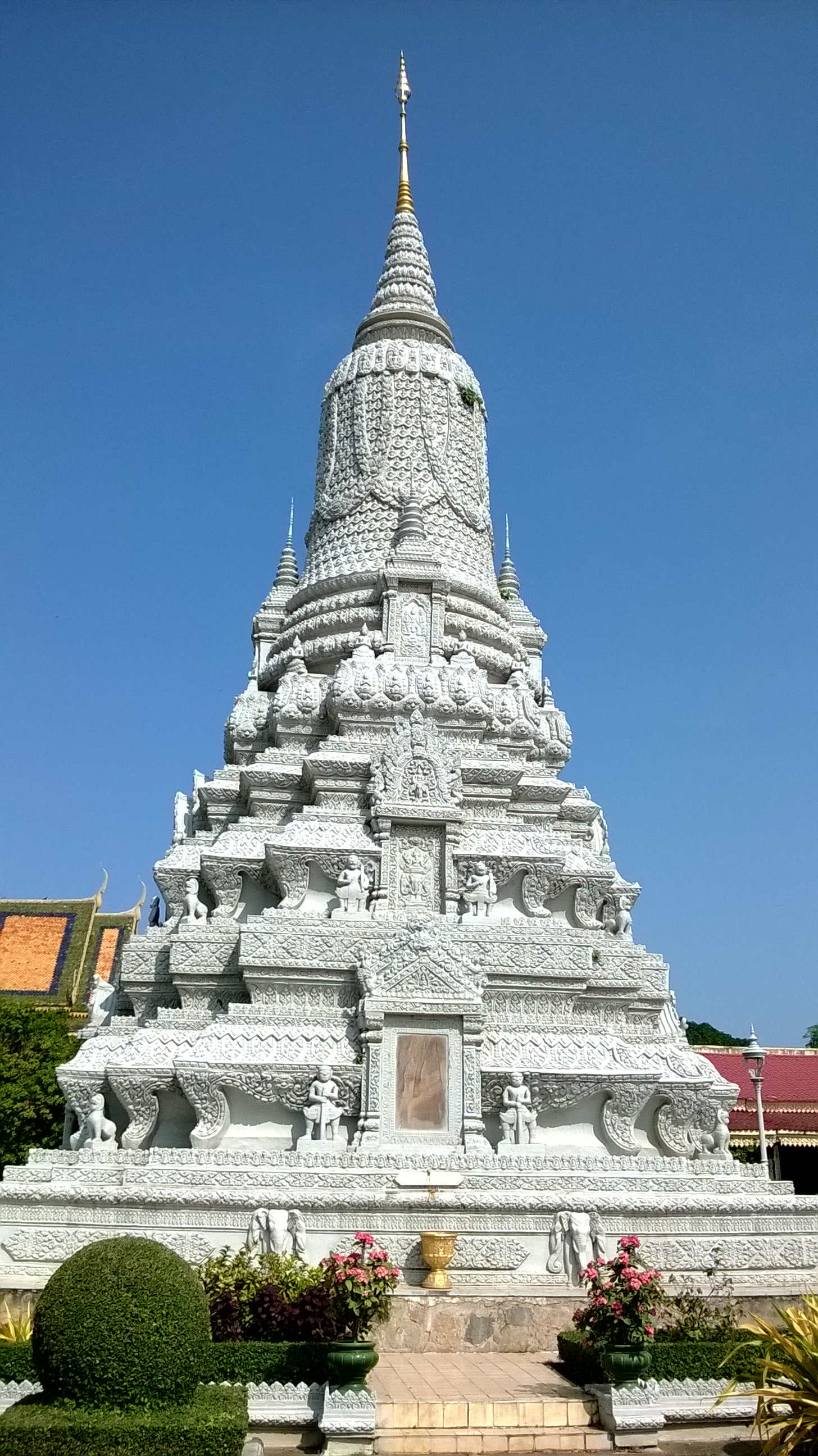 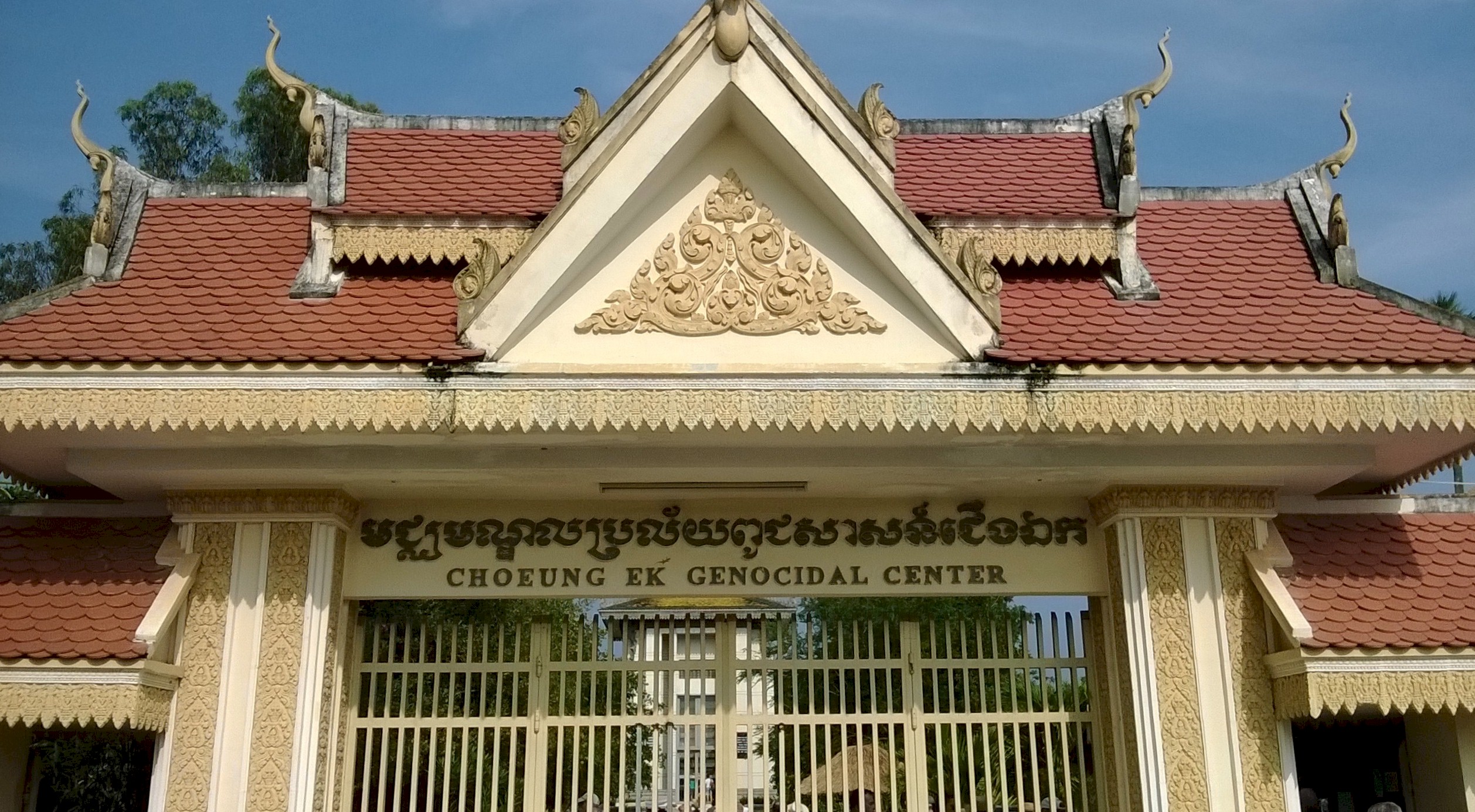 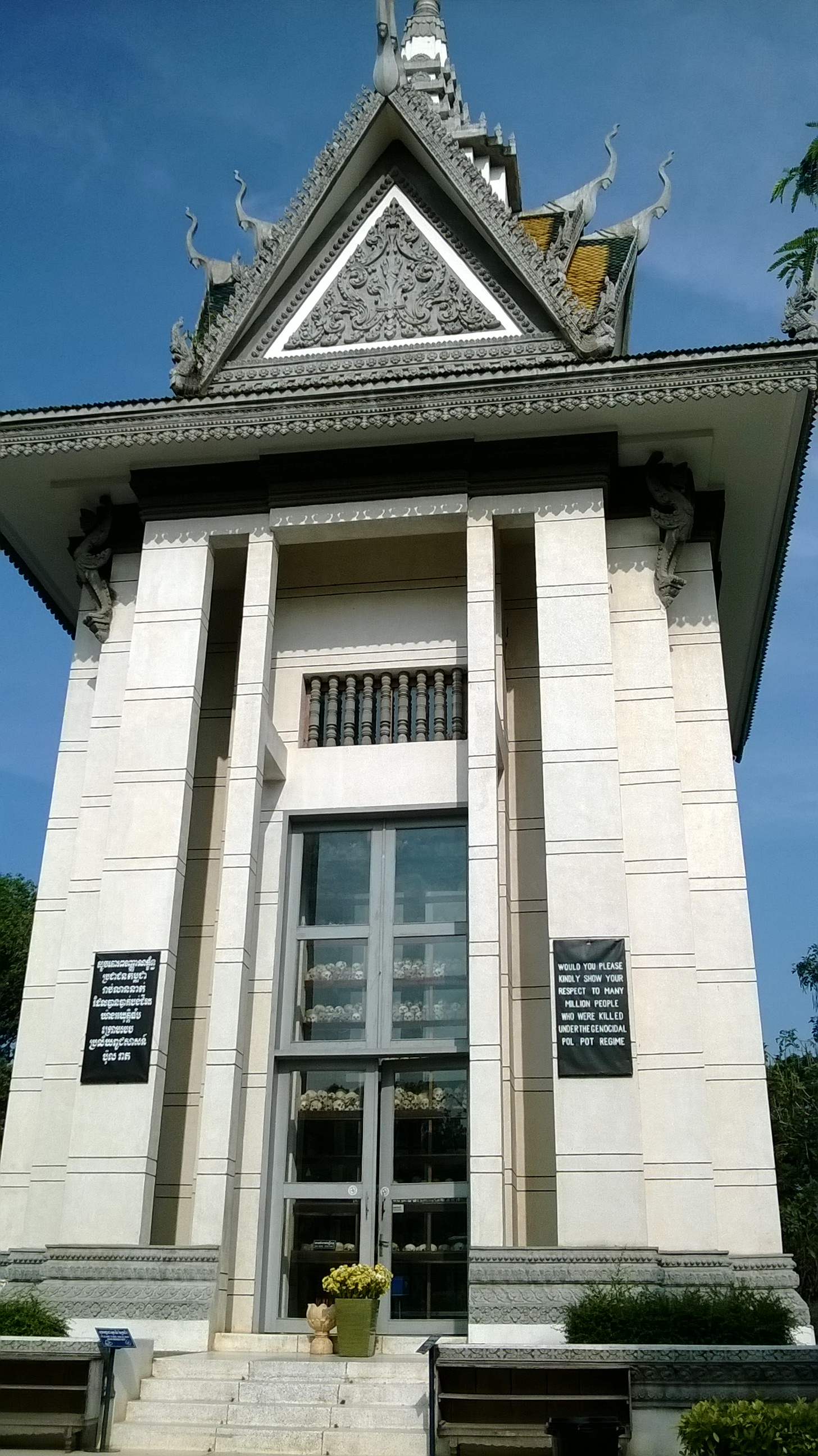 Stupa of Skulls at Choeung Ek 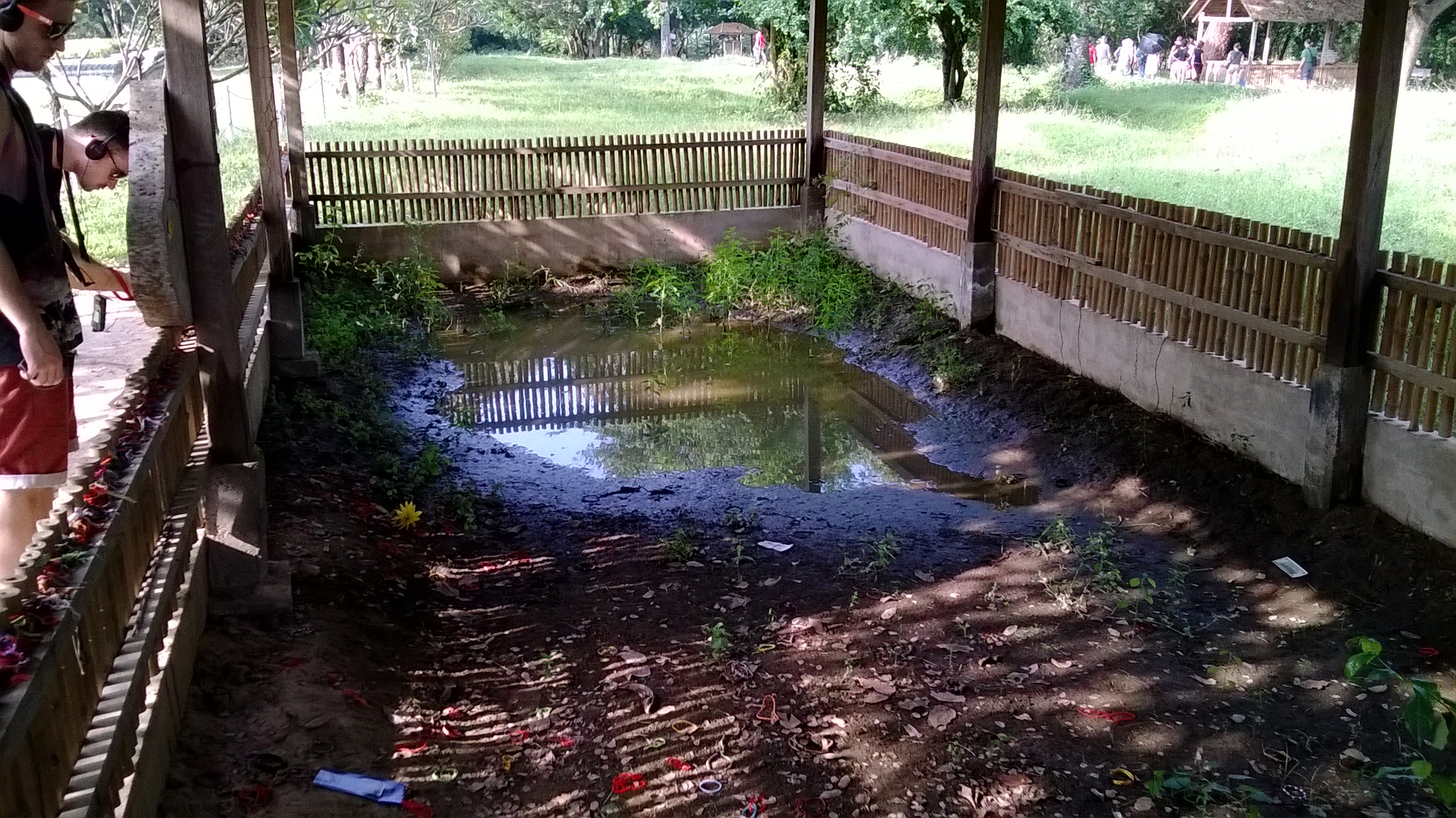