After a delightful weekend in London, we’ve just boarded the MS Sirena in Piraeus, the port for Athens, Greece.  Arriving at the Athens airport with an pre-arranged transfer to the cruise ship, it’s about a 45 minute ride from the airport. Embarkation was quick, but staterooms aren’t quite ready as we board at around 2pm.  There’s also a last minute change in the itinerary.  Due to current political conditions, Oceania has decided to scrap our two planned stops in Egypt.  This is of very little concern to us since we’re on only an abbreviated “inspection” cruise, but there’s plenty of grumbling from other guests all around the ship. 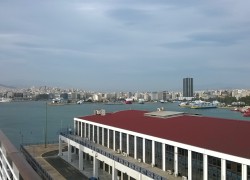 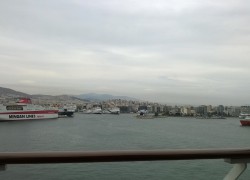 It isn’t until later in the evening that Oceania is able to firm up the itinerary with virtually every port changed except embarkation and disembarkation.  Instead of Patmos we’ll visit Santorini tomorrow.  Instead of Alexandria, Egypt we’ll visit Crete.  And, instead of Port Said, Egypt (for Cairo) we’ll arrive early in Haifa, Israel for a total of 3 nights instead of 2 in Haifa.  Santorini is always great to visit, and this will be our first time to Crete, so that’s good. The extra night in Haifa is fine – we’ll wander ashore on Friday to see what we can see and then join the pre-planned Jerusalem and Bethlehem excursion on Saturday.

Oceania Sirena “feels” a lot like the other R-class ships.  After her $40 million refurbishment in early 2016 her public spaces shine with new carpet, draperies and furnishings.  The staterooms and suites have been similarly updated and include the Oceania Ultra Tranquility Bed – which proved to be very, very comfortable!  There are still some items that obviously remain since the her original R-4 build such as the dated brass stairway railings.  But, perhaps on her next refurbishment more of these items will be addressed.