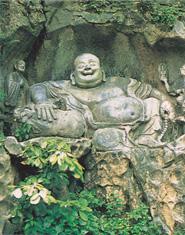 We’re headed to China with Imperial Tours!  This travel professionals “FAM” trip will include typical aspects of consumer tours plus hotel meetings and site inspections. Before joining the tour in Beijing on Saturday,  we’ll spend 4 nights in Kyoto, Japan.

After a quick flight to LAX from DEN, we’ve enjoyed the hospitality of the One World Club in the Tom Bradley International terminal for the last 4 hours. The next leg of the trip between LA and Osaka is scheduled at just over 12 hours.  Fortunately we’re in Business Class on-board this relatively new 787 Dreamliner.  Configured with 7 rows of 2 x 2 x 2 “Shell Flat Neo” seats, these accommodations have received some harsh reviews about their roominess and sleeping comfort.  After take-off, the flight attendants are in the cabin with a drink and dinner service.  There’s a good selection of movies, music and TV shows on the personal entertainment systems.

The Dreamliner is great – huge windows, comfortable cabin lighting and very cool electronically dimming windows that can be controlled at the seat, or by flight attendants at the cabin level. On this trans-pacific flight we’re literally chasing daylight to the west, taking off just before sunset and landing just as the sun finally slips below the horizon.  This type of all-day light is seldom conducive for sleeping since someone always ignores the request for a darkened cabin. But, with shade controls managed by the flight attendants, we enjoy a full “night” of darkness while transiting across the northern Pacific Ocean. 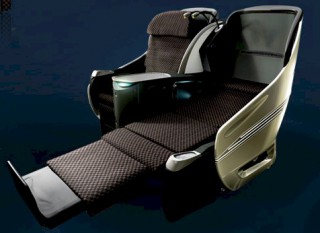 The reviews for the sleeping position of these seats isn’t too far off.  With no extra bed padding, and an angle that positions your feet under the seat in front of you, you’re left with adequate at best sleeping comfort on a seat that’s nearly laying on the floor.  I didn’t try, but exiting or reentering these seats in the “sleep” position could be interesting.  On the outside pair of seats, the aisle seat blocks the window seat egress path in any of the recline or sleep positions.  Obviously these seats take up far less room than standard full-flat seats, allowing the airline to pack more high paying customers into the Business Class sections.  But, all in all – much better than coach – left with this as the only option, I’ll take my Flat Neo.