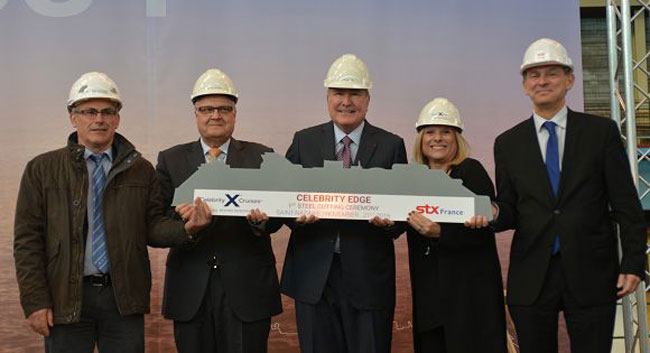 Celebrity Cruises has revealed the names of  its two new ships. Celebrity Edge and Celebrity Beyond will be the first in the new Edge-class of ships. This is the first new ship class for Celebrity since 2008.

The vessels were named as steel cutting took place for Celebrity Edge, in an event at the STX France shipyard. Celebrity Edge will be delivered in the fall of 2018.

Celebrity Beyond will be completed in spring 2020, followed by the third and fourth Edge-class ships in fall 2021 and fall 2022.

“Cutting the ship’s first piece of steel is the traditional first step in the shipbuilding process, and I’m excited to see our dreams turn into reality over the next 24 months,” said Lisa Lutoff-Perlo, Celebrity Cruises’ president and CEO. “We are excited to reveal more details soon, and travelers, trade partners and enthusiasts alike will not be disappointed — this ship is going to be amazing.”