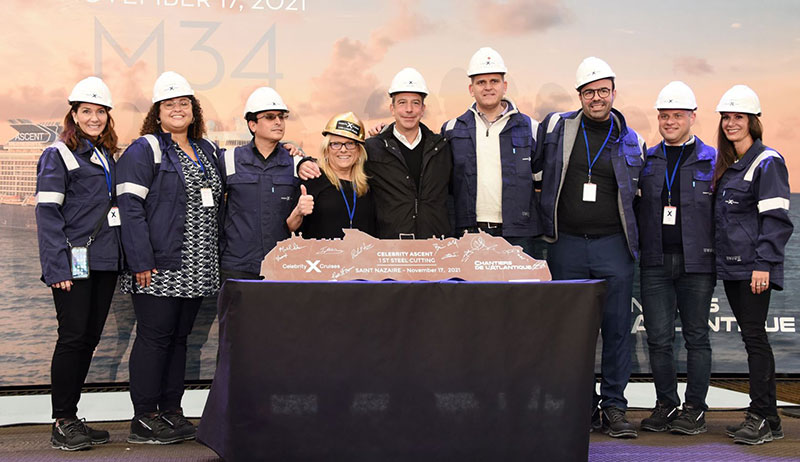 Steel was cut this month for the fourth ship in Celebrity Cruises’ award-winning Edge-Class series, Celebrity Ascent. Executives from Celebrity Cruises and its parent company, the Royal Caribbean Group, signed the ceremonial first cut of steel at the Chantiers de l’Atlantique shipyard in Saint-Nazaire, France.

“The name of this new ship is very apropos as the industry rebounds, but also as Celebrity continues to lead the industry as an unmatched new-luxury brand and cruise line,” said Richard Fain, Chairman and CEO of the Royal Caribbean Group, the parent company of Celebrity Cruises. “Celebrity Ascent will take the industry to new heights as it pushes the boundaries of what people can experience on a ship and how they experience it.”

The ceremony signaled the next chapter in a remarkable year for Celebrity Cruises as it led the U.S. cruising industry out of the pandemic with Celebrity Edge, the first ship to sail from a U.S. port in June 2021. Also in June, Celebrity Cruises formally launched the second Edge Series ship, Celebrity Apex, which sailed out of Athens on its maiden voyage.

Celebrity Beyond, the third ship in the Edge-Class series, is scheduled to begin its inaugural season in the spring of 2022 with a 10-Night Western Europe cruise from London to Barcelona.

Celebrity Ascent is expected to debut in late 2023.